In addition three books have been published which draw on all the data collected by the project and are available from Amazon.co.uk, scroll down for more details. 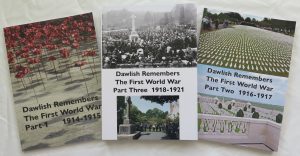 Newspaper articles were submitted and published and can be viewed by each individual year of the project: 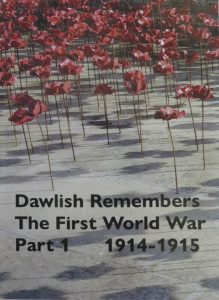 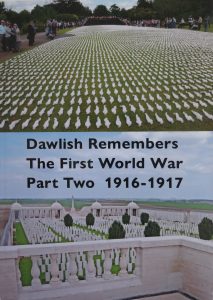 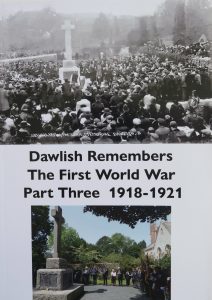 The books contain the material from these web pages with additional material to link to other aspects of life  in Dawlish. The text are illustrated with black and white illustrations. Useful indexes give access to maiden names of wives and mothers for the benefit of family historians.

The third part completes the stories of those who died in the final year of the war and of those who subsequently died from ill health and injuries received. Material is also included on returning prisoners of war and the discussions that took place trying to agree a suitable memorial. An additional index is included that may help those engaged in tracing family histories.

To order them for immediate printing go to Amazon.co.uk, select the Books heading and in the search bar type Dawlish Remembers the First World War. The three books will be displayed and cost of printing and postage revealed, ready to select and order.

“I am incredibly impressed with Book 1….beautifully produced and very informative….A wonderful gift to Dawlish so they will not be forgotten”

“A few weeks ago we received the book “Dawlish Remembers the First World War, Part One, 1914-1915, for which I want to thank you. This book will be placed in our archive and made available to the public. Its importance to us lies in the fact that many thousands of inhabitants of Mechelen found refuge in the UK during WW1, but the account of their stay there is still very shattered and unclear. Thanks to the work of Ms. Laurie at least the story in Dawlish became much more clear.

“Congratulation on “Dawlish Remembers”. It is a wonderful achievement. It’s a great memorial to all the young men from Dawlish killed, but it is also a rich social history with the story of Belgium refugees and other fascinating vignettes (such as the collection of sphagnum moss). And indeed a military history which places the individuals into the terrible development of the war itself. Beautifully written and produced. I have really enjoyed reading it and I’m looking forward to part 2.

“First two  volumes arrived yesterday and are fantastic. The details and photographs are very informative and you’ve gone to a huge amount of trouble to gather it all together, as always. We can’t wait to receive your third volume.